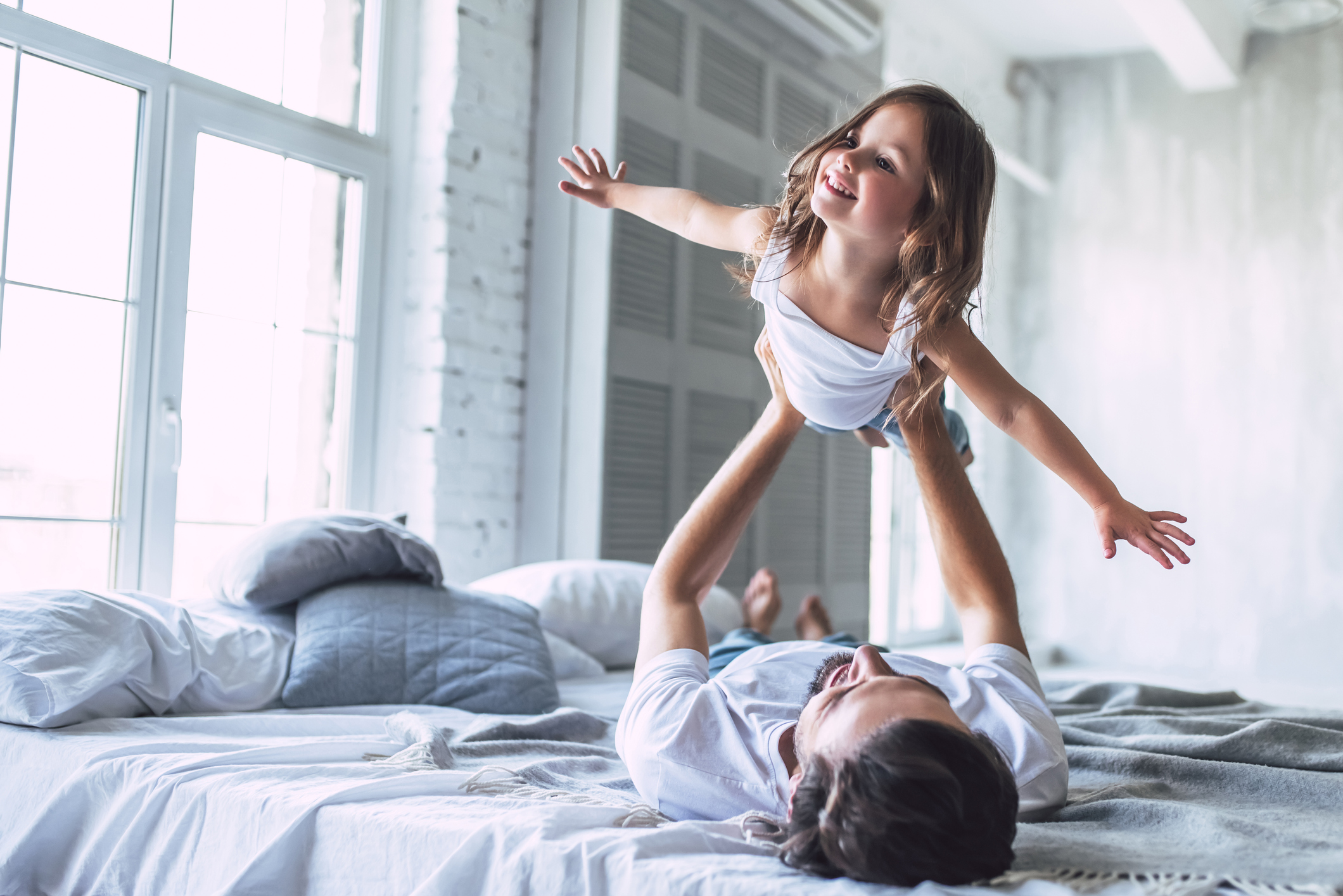 It is often our attitudes that determine how successful we are at any endeavor.  This is certainly true with parenting.  Today we will explore the difference between an attitude of Ownership and an attitude of Stewardship and how each can affect our lives and our families.

This is a part two of a multi-part series for UPLIFT FAMILIES by Richard and Linda Eyre.

First let’s compare an ”ownership attitude” with a “stewardship attitude,” and then let’s think about how each can apply to parenting—so you can decide for yourself which of these two types of a parent you would rather be.

Ownership is the American way!  Life seems to present itself as a giant scoreboard where we are measured by what we own.  We work longer and harder than any other people in the history of the world because we want more wealth, more possessions, more ownership.  And when we compare what we own to what others own (a kind of comparing we seem to find irresistible) the outcome is either envy and jealousy or pride and condescension–-both of which lead to unhappiness.

The right to own property is a key underpinning of a democracy and a free enterprise system.  This right had to be fought for and won in order to free people from tyrants and monarchy. In an economic sense, ownership is a prerequisite for responsibility.  People aren’t as likely to take good care of things unless they own them.  Most home owners take better care of their houses than renters.   But, like control, ownership becomes deceptive and destructive when it is taken too far. When an ownership mentality takes over our thinking, we forget that, in eternal and spiritual terms, God owns all.  We are just using things which pass through our hands—things which come from or are part of God's earth, things we may have a deed for, but which ultimately belong to us all, or to the earth, or to God.

Bottom line: There must be a better perspective, a better paradigm than Ownership.

Stewardship contrasts dramatically with Ownership, and produces different results, and different kinds of motivation as well as higher levels of happiness.

While it is not a much-used modern word, Stewardship is the antidote to Ownership’s liabilities, yet retains and even expands its assets.

Stewardship can be defined as A paradigm in which one feels full responsibility for something he knows he is not fully deserving of; something both worked-for and received, for which we feel dedication and passion; something which brings us a sense of magnify-able and expanding gratitude and joy which we want to share with others.

Perhaps the strongest push-back in defense of the concept of Ownership is from people who believe in the political and economic principles of free enterprise and the rights of property.  It is the principles of ownership and the possession, they say, that give people motivation and ambition and that cause things to get done.  Economically and politically, they are right.  But emotionally and spiritually, they are wrong—simply because there is a higher law, a more advanced paradigm that preserves all of the benefits and strong-mindedness of Ownership, without any of its selfish or prideful or competitive drawbacks, and that attitude is Stewardship.

To illustrate, think for a moment about a favorite example that those with an Ownership paradigm advocate.  "To appreciate the importance of ownership,” they say, “just look at rental apartments that have been turned to owner occupied condos.  Renters often trash and neglect property.  Owners generally take care of it and have pride in it."

Agreed.  But now go to the higher paradigm, and simply ask the question, "Is there any perception or perspective that would cause people to take even better care of a place than if they owned it?"  The answer is, for most people at least, "They would take better care of it if they perceived that God owned it."

The paradigm of Ownership can pit us against each other and foster a negative kind of competition in which we are always comparing ourselves with others and wanting more and more.

The two ultimate and most predictable results of an ownership perspective are greed and pride.  These are things we often do not recognize or acknowledge in ourselves so it is easy to become like the man who said "I'm not greedy, all I want is the land next to mine."

Stewardship, on the other hand, implies that we are only taking care of what we are entrusted with, by the true Owner and for the better good.  In this attitude, we perceive responsibility, but neither greed nor pride can flourish.  A Stewardship paradigm brings with it a natural humility and gratitude that work as well for happiness as greed and pride work against it.

way to grasp the difference between Ownership and Stewardship is, as was briefly alluded to earlier, to think of them as the trunks of two trees, and to observe the limbs that grow on each.

On Ownership tree, there is a jealousy limb and an envy limb and a covetousness limb, because ownership is always comparing and competing, and it is easy to constantly notice those who have more than we do.  There is also a condescension limb and a pride limb, and a superiority limb, because it is also easy to see those who have less than we do.  And there are selfish limbs and frustration limbs and over-ambitious limbs because we want to climb over others so we can look down on them instead of up at them.

There are also some good branches on the tree—a responsibility branch because we are motivated to take care of things we feel ownership for. Even branches of charity and giving can sprout, but they are often choked out by the strong selfish limbs.

On the Stewardship tree, a very different kind of branches tend to grow, such as heavy humility branches and limbs of thanksgiving, because we know from whence all things come.  Appreciation branches sprout for the beauty and opportunity and options that life gives us.  Strong empathy limbs grow for the pains and challenges of others. Limbs for prayer, and faith, and hope are inevitable, because they are known principles by which stewardships are honored, fulfilled and magnified.  Branches of charity intertwine with the limbs of love and of sensitivity, because we know things are not ours anyway, so it is much easier to share them with others.

Being a Stewardship Parent

The difference in the two attitudes manifests itself most strongly when applied to parenting.

Parents who have an ownership attitude—who essentially feel like they own their children, that they created them and that they therefore have total control over them—tend to lack respect for their kids and to treat them as little extensions of themselves.

An ownership attitude in parenting sounds something like this, “These are my kids and they will do what I want them to and become what I choose to make them.”

A parent with a stewardship attitude on the other hand, respects his or her children as equals, knowing that it was God who created them, just as he created us, and that, if the birth order had been different, they could just as well be our parents instead of our children.

A stewardship parent observes a child and tries constantly to know who he or she really is and what gifts and natural aptitudes each child has.  This type of parent understands the responsibility of being a steward over children, but sees that responsibility as a privilege and a solemn obligation and works hard to know the child’s real needs and meet them.

A stewardship parent understands that each child is unique and that there are no one-size-fits-all parenting methods.  This kind of mom or dad prioritizes his or her children as the highest priority and strives to teach them all they need to know to become all that they can be.

Let us all look at each of our children as a sacred stewardship that we need to respect and strive to know on the deepest possible level, and then our stewardship tree will sprout limbs of real wisdom and of the most beautiful kind of sacrifice and love.

Note:  This is the second in a series of four articles on “The Key Attitudes of Parenting.”  The first article can be seen here on UpliftFamilies.org, and the third will come later this month and the final one in early April. All four are based on Richard Eyre’s new book The Happiness Paradox.  To learn more, Uplift readers can visit https://familius.com/eyre-special with the access code UPLIFTFRIEND.

New York Times #1 Bestselling Authors Linda and Richard Eyre have seen their books sell in the millions and be translated into more than a dozen languages. Appearing on virtually every national talk show, including Oprah, Today, and CBS This Morning, the Eyres have also spoken and presented in all 50 states and in more than 60 countries.