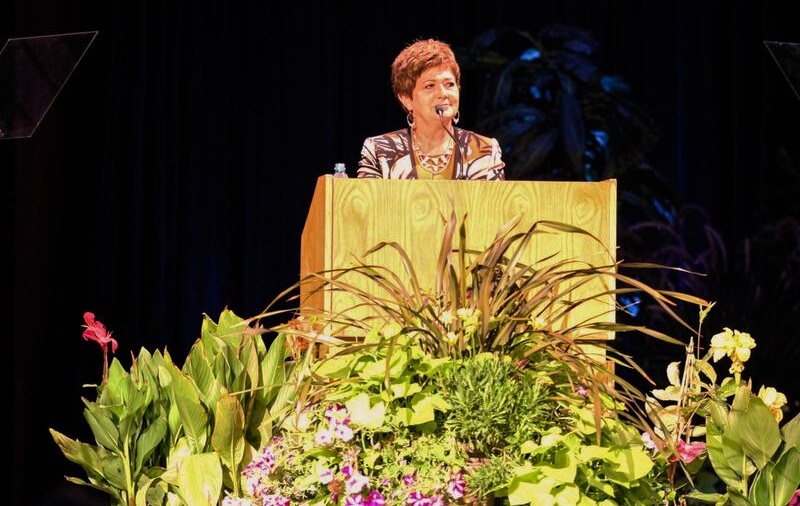 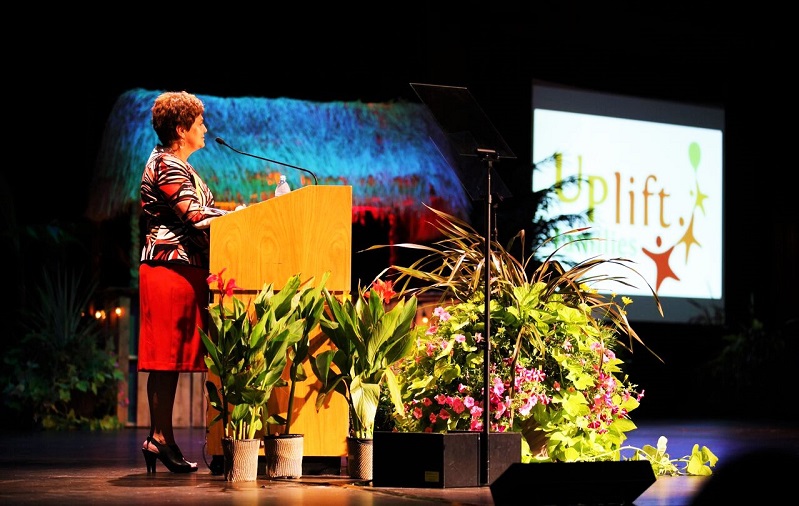 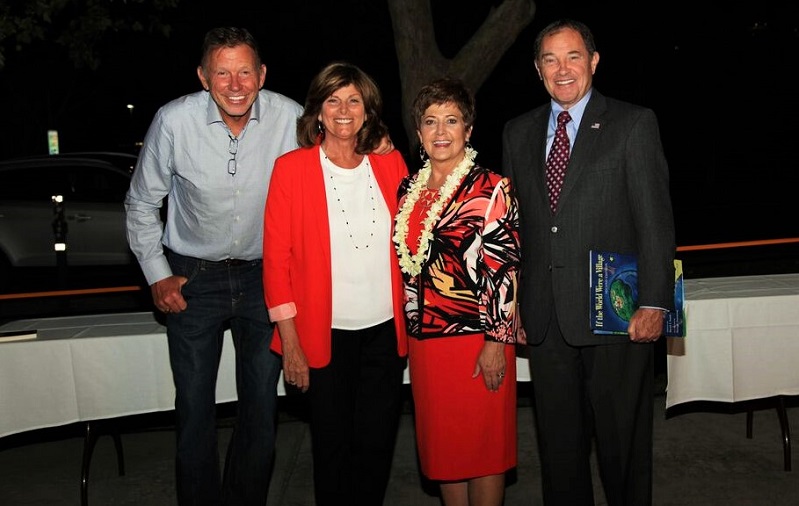 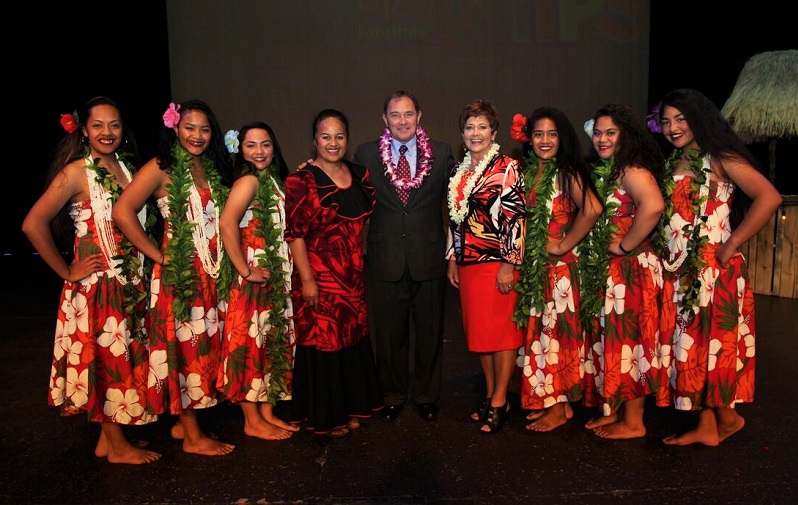 Ailines' Touch of Polynesia (ATOP) performers and founder of the group, Ailine Lao, pose for a photo with Governor and Mrs. Herbert. 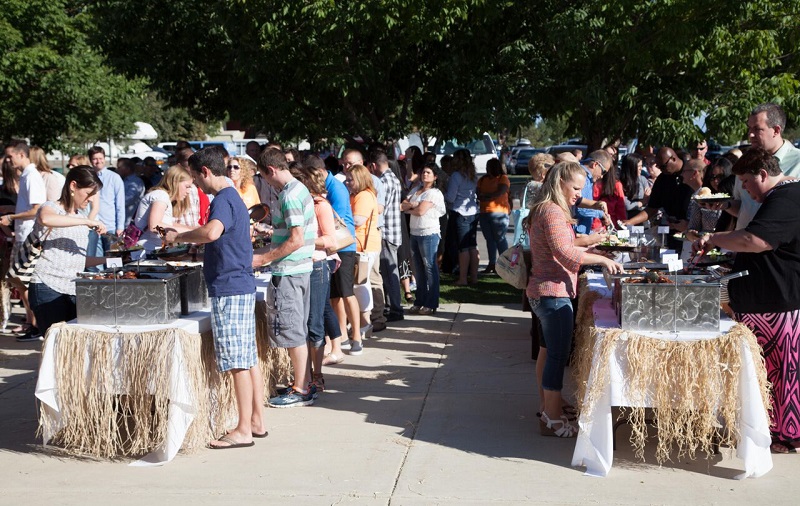 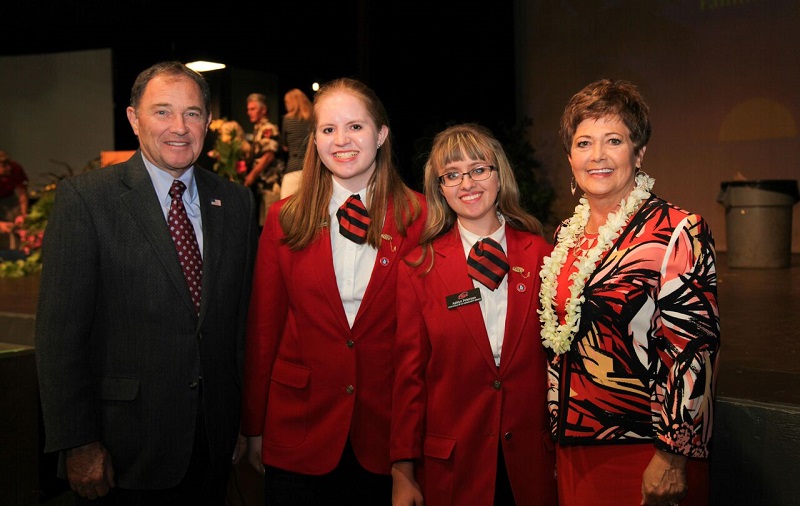 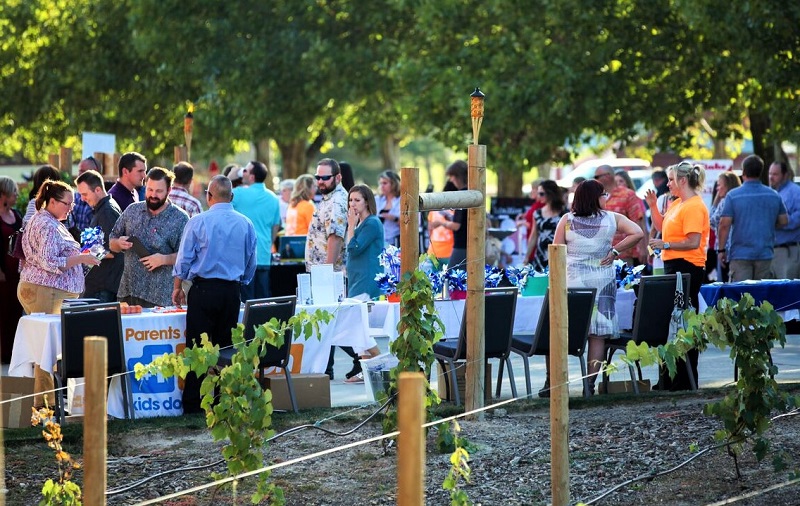 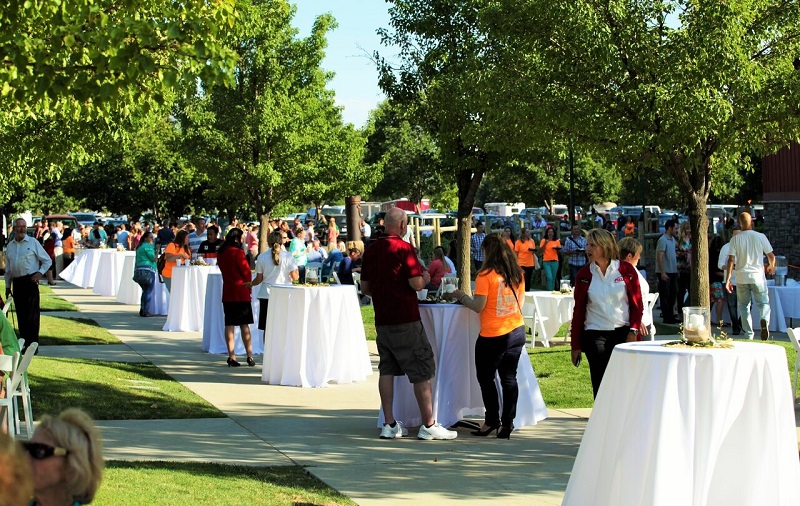 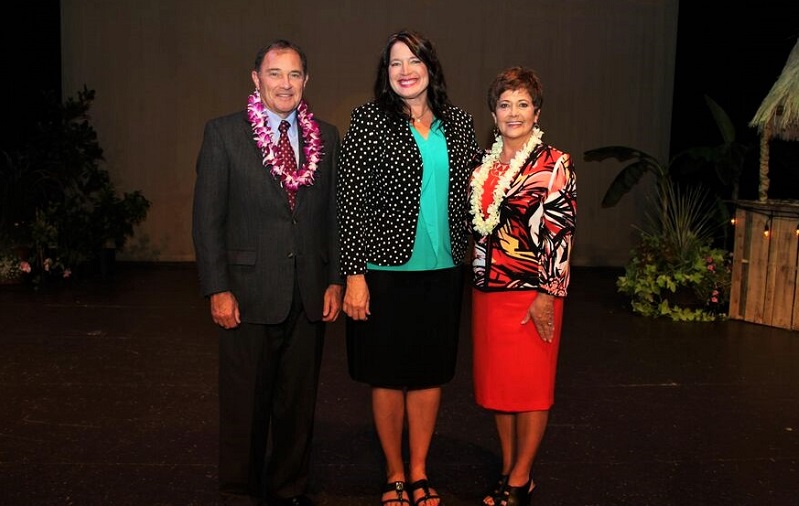 The First Lady has always been an active member of her community. She served on the Provo-Orem Chamber of Commerce, where she was the chairperson of the Partners in Education committee. She was also vice-chairperson of the Utah County Bicentennial Committee and served as a board member of the Utah Private Child Care Association.

Mrs. Herbert serves on the Governor’s Mansion Foundation Board, Governor’s Artist Series Board and is also involved with the Leadership to Keep Children Alcohol Free Foundation. In addition, she serves as Honorary Chair of the Child Care Committee at the Utah Refugee Center. Mrs. Herbert is also currently serving as Chair of the National Governors Association Spouses’ Leadership Committee.

Richard and Linda Eyre, parents of nine children and authors of a dozen best-selling family-centric books (one of which, Teaching Children Values, became the first parenting book in 50 years to reach #1 on the New York Times Bestseller list), speak and lecture throughout the world on subjects of parenting, family, and work/life balance. Through their books, their web sites, their frequent media appearances on media like Oprah, The Today Show and The CBS Early Show and their frequent lecture tours, they continue to work at their mission statement: FORTIFY FAMILIES by Celebrating Commitment, Popularizing parenting, Validating values, and Bolstering balance.

The Eyres find it remarkable and gratifying that in every one of the 45 countries where they have presented, people have similar hopes, dreams and worries about their children and families regardless of economic, religious, geographic and cultural differences.

Their latest book is The Turning, Why the State of the Family Matters and What the World can do about it. Linda is a teacher and musician and founder of "Joy Schools" who was formerly named by the National Council of Women as one of America's 6 outstanding young women. Richard is a Harvard trained management consultant and a former candidate for Governor and director of the White House Conference on Parents and Children. The Eyres also head a non-profit foundation that focuses on the needs of third world children.

Dr. Paul Jenkins works with organizations and individuals to establish and maintain habitual patterns of positive perception and focus that increase happiness, engagement, productivity, profit, and ultimate achievement of professional and personal life missions. With two decades of experience as a professional psychologist, Dr. Paul (as he is known to clients and his laughing, learning audiences) lays out the how and the why behind the art and science of being constructive in an often destructive environment. It is like having an owner’s manual for your brain – one you can actually read, understand, and apply. You understand your own mind and improve its functioning on purpose.

His deeply thoughtful writing, engaging and fun keynote addresses, powerfully practical breakout seminars, individual and corporate coaching and counseling are profound and simple. His clients, readers, and audiences get an iron grip on powerful psychological principles that make an immediate difference in their personal, family, and professional lives. 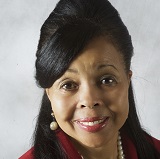 Dr. Jackie Thompson is the Coordinator of the Educational Equity Department in Davis School District and received her Doctorate Degree in Education from Utah State University. She taught school in Pocatello, ID and Sacramento, CA. and worked as an Equity Specialist at the Utah State Office of Education. She began her Federal career at Hill Air Force Base working as a Personnel Management Specialist Intern, an Employee Development Specialist and an Equal Employment Opportunity Specialist.

Dr. Thompson received numerous awards and national recognition. She was also the recipient of the 1994 Spirit of the American Woman Award for Public Education. She is a charter member of the Beehive Chapter of Blacks in Government (BIG). She has been a recipient of the Beehive Chapter's Meritorious Service Award and in 1992; she received the National Meritorious Service Award. She is past President of the National Association for Multicultural Education (NAME). She was one of nine women who received the 1998 Utah Women’s Achievement Award presented by the Governor’s Commission for Women and Families. She served as Mrs. Utah 1999 and was the recipient of the Salt Lake Branch NAACP Martin Luther King Award for the year 2000. Dr. Thompson was the recipient of the 2011 Drum Major Award for the Utah State Martin Luther King, Jr. Human Rights Commission. She was honored as the 2012 Educator of the Year by Omega Psi Phi Fraternity. She also served as Education Chair on the State Martin Luther King, Jr. Human Rights Commission. Dr. Thompson implemented the Hill AFB African-American Community Outreach Program and is currently serving as President of the Utah NAME Chapter.

Deanna Lambson has lots of experience teaching kids as an elementary school teacher, mother of 6, and PTA volunteer for over 22 years! (There must be some award for that!) Realizing there was no curriculum to teach kids to be safe on the Internet. Deanna developed a fun and empowering White Ribbon Week program for her kids’ school. “I’ve Got the Power!” quickly spread to other schools, was endorsed by the Utah State PTA and implemented nationally.

Deanna has since published “Let’s Get Real”, “Be a Media Detective!” and “Brain Power!” Each week-long program helps parents teach Internet safety in a positive and empowering way. Deanna is the founder of whiteribbonweek.org. She and her husband Don live with their children and 3 fainting goats in Sandy, UT.

Dr. Gregory A. Hudnall is considered as one of Utah’s leading experts in community and school-based suicide prevention, intervention and postvention. He is a former high school principal, student service director and associate superintendent with the Provo City School District. Dr. Hudnall has been an adjunct Professor for BYU for the past 15 years and was named as Adjunct Professor of the Year. Dr. Hudnall is a board member of the “Faith Communities Task Force National Action Alliance for Suicide Prevention”. Leader of a state-wide suicide crisis team, he is founder of HOPE4UTAH, a non-profit grass roots organization dedicated to suicide prevention, intervention and postvention in Utah. The school-based program, “HOPE Squads” has been responsible for over 1,000 students referred for help.

Dr. Hudnall has been invited to testify before the United States Surgeon General on suicide in Utah and has trained over 40,000 Utah residents in suicide prevention, intervention and postvention. He was also invited by the U.S. Department of Health and Human Services to present in Washington D.C. on the Circles4HOPE community mental health model at the “Dialogue on Behavior Health and Community Resilience in LDS Communities”.

John Glover commented on 2016 Conference Recap 2018-11-16 14:44:10 -0700
Great messages from compassionate leaders! I hope more people become aware of these kinds of social issues and realize that family is important.