The Dangerous New Fad of Vaping By Dr. Adam Wahlstrom 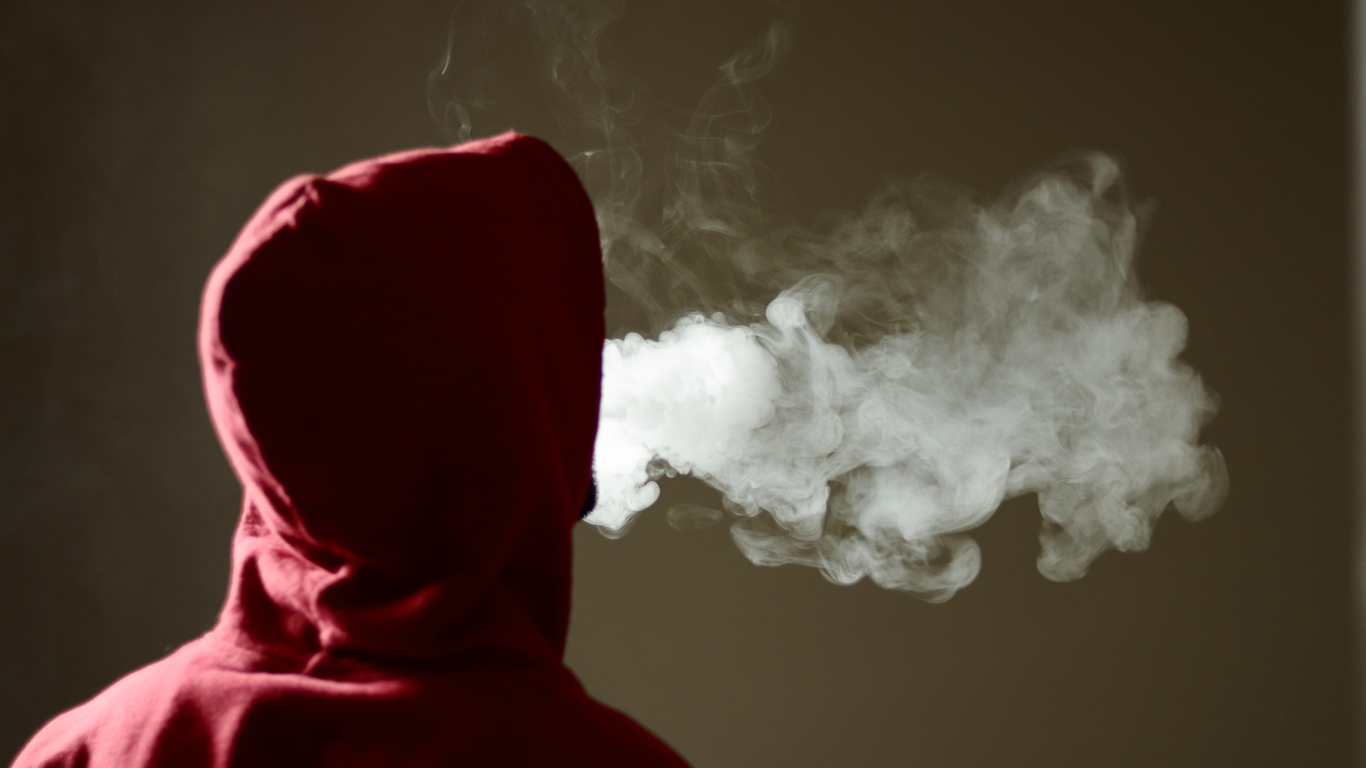 I still remember the look on my brothers face when he caught me with a spent cigarette in my mouth.  Sheer horror was slowly replaced with a sinister glee at the prospect of telling my mom about my transgression against everything we were taught as children.  A grinch-like smile spread across his face as he took in a large breath in order to properly siren out the alarm across the 7-11 convenient store.

“MOOOOOOOOOM!” echoed off the walls with a vibrant ring that turned all heads towards the two children standing next to the coin operated video games.  It was over.  I had made a mistake and now my life was over.  What had started as an innocent search for quarters under the pin ball machine had turned into my utter nightmare.  I was only 7 years old and I wanted to know what the excitement with cigarettes was all about.  So, when I was blindly searching with my hands for loose and forsaken change, and came up instead with an expended cigarette butt; what else could I do but place it precariously on my lips?  My experiment didn’t last long as my mother pulled the foul thing from my mouth with a lecture flowing from her own.  Truthfully, she was probably more disgusted that I would put a used cigarette in my mouth.  Still, I later had to answer such favorite parental questions such as “What were you thinking?” and “Why would you do that?”  But of course, this lecture ended with the dreaded “Just wait till I tell your father.”  Oh great.  Not dad.  You always knew it was serious when dad was involved.  My older brother continued to grin dumbly at me, almost too proud with his good fortune.  My parents were trying to enforce the belief that smoking was not, in fact, cool.  But my parents did not need to worry, the consensus was coming in on smoking at this time in America and I was the target audience for re-education on its hazard to my well-being.

It’s true this wasn’t always the case and if one were to look at the history of smoking in the United States you would find multiple decades in which doctors not only failed to speak out against smoking, but they actively promoted it.  Throughout the 30’s and 40’s it was common to find physicians on ad campaigns.  Much like our current campaigns where 9 of 10 Dentists support a certain toothpaste but replace Dentists with Medical Doctors and toothpaste with poison filled disease sticks.  At the time there was no real proof showing smoking was bad for your health.  Towards the 1950’s, the rising rates in cancer could no longer be ignored by the medical community.  While endorsements stopped, strong denouncement took much longer.  It wasn’t until 1964 when the Surgeon Generals report linked lung cancer and chronic bronchitis with smoking.  In 1970 the Public Health Cigarette Smoking Act banned cigarette ads from airing on television and radio.  In 1984, cigarette companies were compelled to place U.S. surgeon's general’s warnings on all cigarette packs and advertisements under the provisions of the Federal Cigarette Labeling and Advertising Act.  By the time my childhood came around it was widely accepted that smoking was bad for you.  I was a generation raised with this ingrained in my brain.  In fact, one of my favorite commercials was showing thus said brain on drugs with the illustration of an egg in a frying pan.  Just say no.  Smoking was just another frying pan with my brain as its target.

Perhaps we have become too confident in our victory over tobacco.  It’s true that smoking rates have declined sharply.  From 1995 to 2015 the rate of smoking dropped from 25% of Americans to only 15%.  That’s good, right?  If only it was that simple.  E-cigarettes debuted in Europe in 2006 and the industry has taken off yet again.  Between the years of 2011 to 2018 the numbers of those who reported vaping rose from 7 million to over 40 million.  As I see more and more patients entering into my office reporting use of e-cigarettes it becomes more evident that our previous tactics no longer are working.  Most of the kids and teenagers that come to my office see vaping as a harmless substance.  Gone are the worries of toxic chemicals and harmful particles in many of the minds of these kids.  It is incumbent on us to be educated on these devices as to not repeat the same mistakes made in the past.  We no longer need decades of proof to make a difference.

So, what is this newfangled thing called vaping anyway?  And why should I worry about my kids?  E-cigarettes are a device that heat nicotine (or other substances like THC) to create a water vapor that you inhale.  Unlike traditional cigarettes these vapors can be flavored with cotton candy, apple pie, cherry or really anything you might have a small craving for.  The most advantageous part of vaping is its lack of evidence for teenagers.  There is no lingering odor to cover up, and the device itself can be disguised as any regular day object.  Vaping devices can be made to appear as a hairbrush, USB drive or regular looking pen.  This makes them increasingly convenient not only to hide, but to use in class or any other place in plain sight.  Teachers and parents can’t smell them and it’s easy to blow the vapor into a sleeve or elsewhere.  Above all these advantages, it’s also much cheaper than a regular pack of cigarettes.  These innovations on our old friend the cigarette have created a perfect situation for a new generation to become addicted to smoking.  Nicotine still remains just as addictive as ever but now it tastes like fruit punch!  However, not only are we seeing a new generation shackled by a smoking addiction, there is a more pressing concern in the development of Vaping Associated Pulmonary Injury (VAPI).

VAPI is on the rise and the disturbing fact that remains is we are uncertain of the exact reason it occurs.  There is no specific chemical identified.  Those who use THC containing compounds are more at risk, but not exclusively. We only know that it occurs when someone has been vaping.  It does not require that you use a vaping device long term, it can happen with only one use of an e-cig.  Those with the disease develop an intense inflammatory response in their lungs that makes it much more difficult to breath.  According to the CDC as of October 22, 2019, 1,604 cases of VAPI have been reported. A total of 34 deaths have been confirmed and this is climbing.  It is uncertain how many others have become ill in the past and went unnoticed due to lack of knowledge of the link between the disease and vaping.  Those who present with VAPI have shortness of breath and cough.  Some have developed hypoxia, or a state where they are no longer able to maintain typical oxygen levels in the body.  Many also have diarrhea, vomiting, and fever.  There is no definitive treatment other than supportive care and decreasing the inflammation in the lungs as much as possible.  Many of these cases end up in the intensive care unit.

When I think back on that day years ago as a child, I reflect on the fact that I absolutely knew smoking was bad for me.  It was common knowledge. There was no debate, no confusion.  Those that choose to smoke tobacco products have acknowledged their willingness to take the risks clearly laid before them.  That is no longer a crystal-clear picture, however.  There are numerous risks yet to be revealed and plenty of alarming warnings bubbling to the surface as we speak.  We as a community don’t need to repeat the previous mistakes made by our predecessors.  We don’t need to wait for decades of overwhelming evidence to warn about the dangers of vaping.  I have heard people say that “these aren’t as harmful” as regular cigarettes and this is not true.  We couldn’t possibly know this yet.  We do know that there are those who have already been injured and countless others who are now addicted to nicotine that otherwise would not have been.  Vaping carries with it the inherent danger of appearing harmless.  Water vapor?  Who’s afraid of water vapor?  It is not uncommon for me to ask my teenage patients about drug use and to get a negative answer, but when I counter with a question about vaping, they give the affirmative.  They don’t think of these devices in that light. The dangers of this new fad must be clearly stated and widely circulated to our children.  This is not a safe alternative to smoking; this is not a way to stop smoking.  It is a new way for people to become addicted to nicotine and other substances.  Make this clear now and we won’t have to look back with regret on our actions today like we do with those decision made by our precursors before us.

For more information on these sources go to